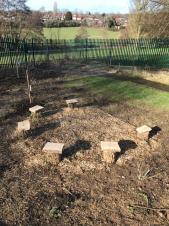 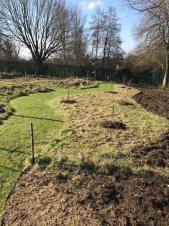 Woodland path at the Ashbrook Centre

Prior to October 2019 the Trust was being run by three Trustees and had been operating under a lease from Derbyshire County Council who are the landlords of the building. It is the intention of the Tust to hand over the running of the Ashbrook Centre to the Parish Council once it is fully refurbished and financially viable.

In October 2019, the Parish Council voted to change the composition of the Trustees and increased the number of Trustees from 3 to 7 in order to provide structure and governance. The new Trustees are focused on pushing the progress of refurbishment and ensuring that available funding is targeted at the priority tasks to open the hall and realise income through bookings.

From October 2019 a monthly report has been given to the Parish Council Meeting, and a clear record of funds spent and income received has been included in the financial statements. All contracted work has been subject to the governance laid down in both the Trust Financial Procedures and the Parish Council Financial Policy.

Trustee meetings have been held monthly, and minutes published to all Trustees. A full and detailed project plan is in the process of being updated, published to the trustees and agreed upon.

Since October 2019 the Centre has undergone a complete transformation; and from February 2020 it has been open again for public use although constrained by Covid precautions.

The area around the Centre has been developed into a well-maintained outdoor space with indigenous tree planting and wildflower gardens. The Parish Grounds Contractor is now based at the Centre and has developed the area, largely at his own cost. The recycling of Christmas Trees and the composting of the Parish Green Matter from hedge cutting and mowing all takes place within the Centre grounds.

As a result of the Trustees' efforts in redecorating the main hall, the area has been used by a growing number of groups; and as a result of a recent review it will be 80% utilised with the introduction of three further groups.

In the past 18 months, there has been an increased concerted effort, and several planned projects are completed. These include the final touches to the new kitchen facility, the installation of new UPVC frames and doors at the main entrance, the refurbishment of all the toilet facilities and new lighting.

The Multi-Use Games Area (MUGA) has been cleaned and made safe. It is now being used not only by regular groups such as 'Walking Football' and' Bounce to Beats' but also, free of charge, by the general public at weekends and during the school holidays. It has been exceptionally pleasing to see an increase in the number of young Parishioners playing football and netball at the weekends.

In recent months we have seen a significant increase in the number of enquiries by local groups and we are pleased now to have a wide range of activities at the Centre:

2021/2022 is the year in which the Trustees hope to open the remainder of the hall, and they are currently working toward completion of all the facilities by March 2023. The work planned for the coming months is to refurbish the four smaller meeting rooms and the shower block; and to replace the heating with an economical and eco-friendly system.

Funding has been received from the Parish Council and other sources to assist refurbishment, and grants are being sought from Borough and County Councils as well as local businesses. It is envisaged that the Centre will be self-funding from lettings by March 2023.

The Trust Annual Report for the Charity Commission is now due and will be submitted along with the financial statements for the financial year.

Ockbrook and Borrowash Parish Councillors have succeeded in negotiating a fifty year, rent free lease with Derbyshire County Council to take over the running of the Ashbrook Centre in Borrowash and bring it back, after a major refurbishment, into community use.

The decision to award the Centre to the Buildings Committee who have been involved with the negotiating process came after a CABco meeting at D.C.C. Matlock on June 7th 2018.

Five years of talks, submitting eight revisions of the business case and providing a vast amount of financial information have finally paid dividends. The search to provide funding to allow the work to begin has been under way for some time. Funding to repair the flat roof at the centre has already been secured from Erewash Borough Council by way of a Rural Communities Grant.

The Parish Council has already committed to providing forty thousand pounds of funding over four years to get priority work under way as quickly as possible. Funding Applications are being prepared for submission to the Garfield Weston Trust, the National Lottery and W.R.E.N..

The floodlit outdoor games area has already been brought back into use for clubs to use. The grounds at the centre will be tended by the Parish Councils' Wayne Peapell and local businesses will be approached for sponsorship to help with the refurbishment.

The Parish Council are extremely grateful to everyone who has helped over the last five years, and in particular, David Steare who has done a brilliant job in preparing the business case.

Over twenty groups have contacted either myself or the Parish Council directly to express an interest in using the centre for a variety of events.

Any group or organisation who would be interested in using either the outdoor pitch or the centre please contact Councillor Mike Wallis tel. 01332 679222 or mob. 07590 453.410 or by e-mail, mike_wallis@hotmail.co.uk .

Finally, a very big thank you to Councillor Barry Lewis, Stephen Walters and Katie Granger from Derbyshire County Council for all their help and support.